This post covers details of the recent ClickFunnels 5 year birthday announcement made on September 23rd 2019 that primarily affected ClickFunnels pricing moving forward but also introduced a renewed sense of focus as well as some feature related announcements and support model changes.

In case you missed Russell Brunson’s announcement, we break down all of the details for you in this handy summary! The Future of ClickFunnels

Then in true Russell Brunson style – he got a little vulnerable…

And he admitted he had made a mistake…

2 years ago he had decided to try and pursue too many different features simultaneously which had only led to increased cost and decreased support capabilities.

As a result Russell Brunson and the ClickFunnels team were announcing a new focus on remaining the best at what they do – being the category king of sales funnels platforms.

They are therefore sunsetting some features and have elected to remove the word Actionetics from their vernacular. In fact Actionetics is being rebranded ‘Follow Up Funnels’ and certain features will no longer be made available to new users.

Brunson also eluded to a new focus on partnerships and acquisitions in order to work with category kings of specific categories rather than trying to pursue ClickFunnels being the category king of all of them.

ClickFunnels will now offers it’s users the opportunity to help resolve support tickets and get paid in the process!

Visit this link to find out more about the application process!

Probably the biggest part of the announcement related to the forthcoming changes in ClickFunnels pricing on a go forward basis.

Whats more for those users currently on the $297 per month Etison plan, they will be upgraded to Platinum at no additional cost. Similary users on the ClickFunnels $97 per month plan can also secure Platinum for $297 per month if they act now by upgrading their account at http://upgradenow.com.

What Is ClickFunnels Platinum?

As mentioned above, ClickFunnels Platinum is the new membership tier introduced by ClickFunnels as part of their 5 year birthday announcement.

Ultimately ClickFunnels Platinum seems destined to replace the current ClickFunnels pricing and in particular the Etison plan that costs $297 per month… but Platinum will come with an increased price tag of $697 per month for new user signs ups. Existing Etison Plan members will be grandfathered in at $297 per month.

So what do you get exactly with ClickFunnels Platinum?

Per Russell’s stack slide you get all of the following:

Interesting… tell me more about the last three…

What Is The ClickFunnels Daily Virtual Hack-A-Thon?

These will be scheduled daily live virtual summits where you can join to learn how to build specific funnel types and follow along yourself.

So whether you are looking to create a lead funnel, a webinar funnel or somethings else… there will be a scheduled day to learn each of those funnels.

This is a brilliant new feature that really is testament to the ClickFunnels mission to help make its users successful.

What Is The Funnel Hacker Forum?

ClickFunnels is well known for its awesome Facebook community but have you ever noticed how the Facebook group is actually double the size of the ClickFunnels number of active paying users?

The result is that not everyone providing an answer is legitimately into ClickFunnels or well placed to answer your question.

Enter the new ClickFunnels forum that will only be accessible by paying members so you can rest assured that only users will reply to your thread.

Think of FunnelFlix as a vault of courses and content designed to educate you on things like funnels, marketing and mindset principles to once again make you more primed for success.

At the time of the announcement, FunnelFlix was showing the following content:

As a Platinum user you will have immediate access to the following items within FunnelFlix:

New content will also be added on a go-forward basis!

So in summary, ClickFunnels and Russell Brunson announced:

Russell also mentioned that this announcement was just one of 3 phases of big announcements!

It’s fair to say that once again ClickFunnels shows they mean business and that they are continuing to evolve as a company. 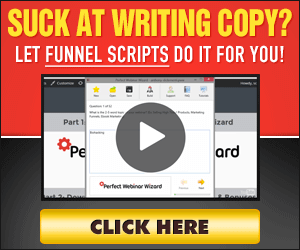